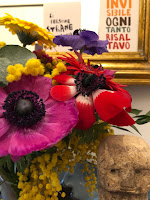 A few weeks ago, on 27th of January, for the International Remembrance Day, we explained to our kids what it meant to have the strict order to stay at home, without being able to go out except at scheduled times, with the ban on meeting people and gathering in public, even in those places which have always been considered public, as are cafes and parks.
We spoke about the restriction related to activities of any kind, except for the supply of basic necessities and basic production, but only during the allowed hours.
We remembered the queues in front of the few shops that remained open.
We explained how Institutional cars passed on the streets, warning from loudspeakers not to leave the house, as doing so was at own risk of death.

We explained how there was an obligation to always carry a document certifying the condition of need to exit, which was chosen from a few given options (health, supply, essential production).
We explained that there was still the possibility of being stopped and controlled and sanctioned according to the interpretation of the gendarme.
We remind that there was a time when people lived in the fear of having to continually justify oneself simply for being alive, wanting to support the community, or living nearness and sharing.
We said that it was something that should never happen again. And today?

Remembering is a bit like daydreaming, and sometimes daydreaming is a bit like remembering ...
The power of imagination has the gift of understanding shortcomings and elevating desires as a model for the whole world.
Fantasy, imagination, symbolic projection help to overcome difficulties, restrictions, shortcomings, closures, and they giving hope, foster the strength to react and suggest ideas for soul survival practices ...
So let's imagine small acts, once considered the norm, and now become small subversive acts ...
Imagine colors ... imagine wildflowers gathered during a walk on a meadow ... human warmth on the skin ... an appointment for a coffee in a small cafè hidden in the hills ... a restaurant on a country road invisible and unknown to many ... the touch, both imperceptile and perceptile ... a stolen, illegal hug ... a coffee and an aperitif with friends ...

In order to live reality, one must dream it first, it was said once ... maybe it's time to dream it all over again, breathing freely and smiling ...
care community culture psychoanalysis psychology