The group work aims to deepen the personal dimensions within a shared path with other persons who are all peers, while the conductor assures transparency, equality and balance.
The group itself is a precious instrument to deepen the self-consciousness of participants, who have the opportunity to share a protected environment where they can express themselves with complete freedom, taking care to give space to everyone.
The group work dimension allows participants to share their memories, their narrations, experiences, emotions and everything that happened to them through their speeches, significations and representations.
The group share a specific theme from the beginning; the theme might evolve following the vitality and the development of the group itself.

The duration of the group work is variable: 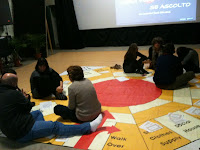 - few hours, as for single sessions with specific themes
- few sessions, used to deepen specific issues following a conduction finalised to find a response to the questions arising from the participants themselves
- a longer time, to follows the development of the group and of the participants toward a modulated path of awareness and consciuosness raising.

The group agrees on few, defined rules: no value judgements; no judgements regarding right and wrong behaviour; a mutual agreement on a constant participation and on the calendar; the commitment to bring to the goups all the eventual dinamics which might happen outside the group itself.
The approach is based on the methodology of group-work and of sharing between peers, which leaves participants with the complete freedom in terms of what and how to express themselves, taking care to give space to everyone.

when working in groups with people wounds, most of our inner growth becomes a public affair, and public tensions become our inner work ... just alowing me to face my anger I could experience and overcome my wounds ... group-work will not only make a mess out of you, it does not even teach you facts or theories: the group-work indicates you a way toward awareness and openness to the impossible (Arnold Mindell, Sitting in the fire, 2011)
The group work allows to unify the contributions of all participants, moving them from the past into the present, in a dimension of togetherness where individuals open the door to a thinking about possibilities, to a personal and intimate dimension of dialogue and shared affection. 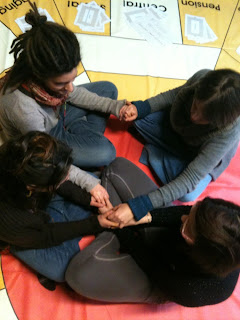 the group-work consists of two phases: first the interaction, often emotional, then the understanding of the interaction ... an alternating sequence of evocation of emotions followed by their comprehension (Irvin Yalom, The Schopenauer cure, 2005)

Especially when working with bigger group with few disposable sessions, the appraoch implies the necessity to limit the time available for each speaker under a common accord between the participants and the facilitator. Participants respect the time-limits, without interrupting each other, and limit their comments on the various contributions.
However, in case of smaller group and with long-term works, participants experience a greater sharing, in a more "intimate" dimension which made it possible to talk at a more in-depth level about each contributions.

The group has thus become a space to "be with ...", to get closer to emotions and to imagine the development of a shared project.